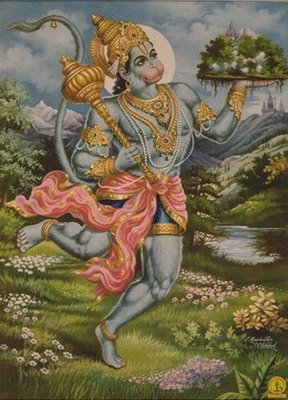 The Enduring Relevance of Hanuman

In Hindu symbolism, a monkey signifies the human mind, which is ever restless and never still. This monkey-mind happens to be the only thing over which man has absolute control. We cannot control the world around us but we can control and tame our mind by ardent discipline. We cannot choose our life but we can choose the way we respond to it. Hanuman, when he was a child, was tempted by the sun and he rushed towards it thinking it to be a delectable fruit. On his way however, he was distracted by the planet Rahu and changed his path. Thus Hanuman is the temperamental human intellect, which is unquiet and excitable. It is only by diverting it to the path of pure bhakti (devotion), that it can be made aware of its profound and silent essence.

According to the Hindu point of view, there is no objective world 'out there.' The whole manifested world is a subjective phenomenon created by our own selves. We - as humans - have the unique ability to condition our minds. In other words, we have the power to change the way we perceive life. And by changing our perceptions of life, we have the power of changing our world. When Hanuman enters Rama's life, he changes Rama's world. He transforms a crisis (the loss of Sita) into an opportunity (rid the world of Ravana). He transforms a victim into a hero.

Thus, Hanuman is no ordinary monkey. While embarking on the search for Sita, the monkeys were confronted by the vast ocean lying between them and Lanka. They wondered how they would make their way across this mighty obstacle. Someone suggested that Hanuman jump and cross over the sea. But Hanuman was doubtful, "I cannot do that," he said. At that moment, one of his companions reminded Hanuman of the awesome powers lying dormant within him. Instantly Hanuman regained memory of his divine strength and he successfully leaped across the ocean. Thus our mind too needs to be reminded of its divine potential and of the fact that it can achieve phenomenal heights provided it believes in its ability to perform the task in question. Truly Hanuman is symbolic of the perfect mind, and embodies the highest potential it can achieve.

The Spiritual Significance of Hanuman 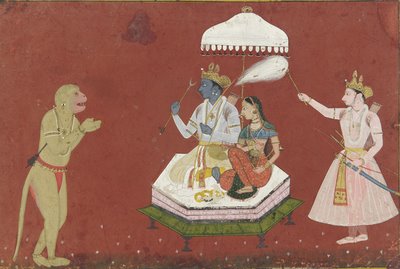 The goal of all mystical yearning is union of the individual soul with the universal soul. In the Adhyatma ('spiritual') Ramayana, a Sanskrit text dating from the fourteenth or fifteenth century, Sita represents the individual (jiva-atma), which has separated from the universal (param-atma) symbolized by Rama. In a beautiful interpretation, Hanuman here is said to personify bhakti, which annihilates the 'ahankara' or ego (Ravana), and re-unites the two.

Shortly after he is crowned Emperor upon his return to Ayodhya, Rama decides to ceremoniously reward all his well-wishers. At a grand ceremony in his court, all his friends and allies take turns being honoured at the throne. Hanuman too goes up, but without desiring a reward. Seeing Hanuman come up to him, an 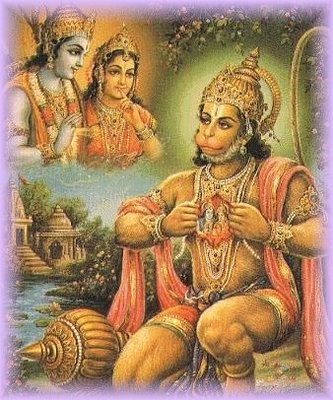 emotionally overwhelmed Rama embraces him warmly, declaring that he could never adequately honour or repay Hanuman for the help and services he received from the noble Vanara. Sita, however, insists that Hanuman deserved honour more than anyone else, and asks him to seek a gift. Upon Hanuman's request, Sita gives him a necklace of precious stones adorning her neck. When he receives it, Hanuman immediately takes it apart, and peers into each stone. Taken aback, many of those present demand to know why he was destroying the precious gift. Hanuman answers that he was looking into the stones to make sure that Rama and Sita are in them, because if they are not, the necklace is of no value to him. At this, a few mock Hanuman, saying his reverence and love for Rama and Sita could not possibly be as deep as he was portraying. In response, Hanuman tears his chest open, and everyone is stunned to see Rama and Sita literally in his heart.