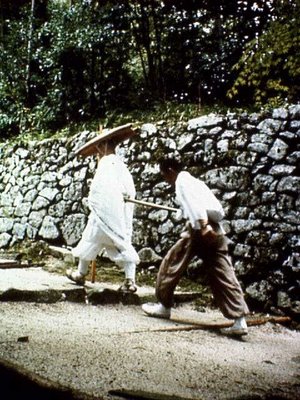 
The greatest athletes in the world today are neither the Olympic champions nor the stars of professional sports, but the "Marathon Monks" ... all of Japan's sacred Mount Hiei. Over a seven year training period, these "running Buddha" figuratively circle the globe on foot. During one incredible 100-day stretch, they cover 52.5 miles daily - twice the length of an Olympic marathon. The prize they seek is not a pot of gold, but enlightenment in the here and now.This documentary program is about these amazing men - Tanno Kakudo and the magic mountain where he trains. It is the philosophy of Tendai Buddhism, which inspires him in his quest for the supreme. The viewer will learn about the monk's death-defying fast, his vegetarian training diet, his handmade straw running shoes, and other feats of endurance such as the mummifying fire ceremony. Illustrated with superb cinematography and music, this film contains the first full insight into Mount Hiei and Tendai Buddhism based on the book "Marathon Monks of Mount Hiei" by John Steven, published by Shambala Press.

Horton Hears a Who


Combining Terence McKenna's mushroom mythology with John Cage's I Ching-rendered 'Radio Music', this spiraling display of ... all psilocybin-containing mushrooms is an attempt to create the abstracted experience of the mushroom personality through the the highly limited interface of the audio-visual art form.


Shot in 1976, but never released, this film is a rare visual document of the Tarahumara - one of the most remote and isolated tribes of the ... all North American continent. Filmed during a gathering at the mission village of Norogachic of northwest Mexico, the nomadic Tarahumara are observed celebrating their special interpretation of the Easter Festival. The week-long gathering uniquely explores both Christian and pre-Christian expressions of honoring the Easter Moon, the time when traditionally the Tarahumara dance, plant corn and drink Tesvino, the corn wine that blesses nearly every Tarahumara occasion from birth to death.

Koyaanisqatsi: Life out of balance


Koyaanisqatsi: Life out of balance is a 1983 documentary film directed by Godfrey Reggio with music composed by minimalist composer Philip Glass and cinematography by Ron Fricke. The film consists mostly of slow motion and time-lapse photography. The documentary contains no narration and relies heavily on music to set the film's tone. Glass and his Philip Glass Ensemble have toured with the film, playing music live in front of the film screen.

This is a must see movie.